Many Vendors offer multi boot, this receiver specific feature, when available makes it possible to install multiple images on a receiver. So like 3 or more versions of PLi, how much images you can install when it is supported depends on the slots, let's say the partitions that are present.


When this feature is supported by your receiver then basically OpenPLi offers 2 images in the download section The "recovery image" gives you a multiboot system, not only between E2 and Android, but also between different E2 images, which you can flash either from the boot menu, or from the image. If you flash the "emmc" image, you don't have multiboot, but only a single image, like with other boxes.

When you flash a multi boot version from the menu a backup is created and restored by default. When this flash process starts there is a time window to cancel it, so by default a backup is created from the current image and will be restored right after the flash on the newly installed image. In most cases and certainly when there is no HDD present, a USB stick with enough space, has to be plugged into the receiver so create the backup. These backup files are relatively small. In many cases it is best to use a USB stick of about 1 Gb, albeit to store the downloaded image.

How to select an installed multi boot image

There are 2 ways to select the image to boot from. Using the remote control simply press Menu and go into Standby/Restart menu. Press long on the power control button using your remote control a menu appears and as you can see in the picture below there is the "Multiboot image selector" option, once pressed it offers the images you have installed. 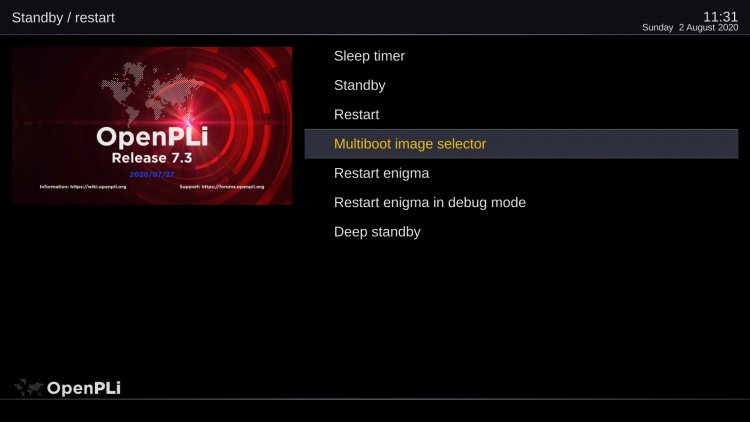 Now you can pick one and OpenPLi will boot into it. 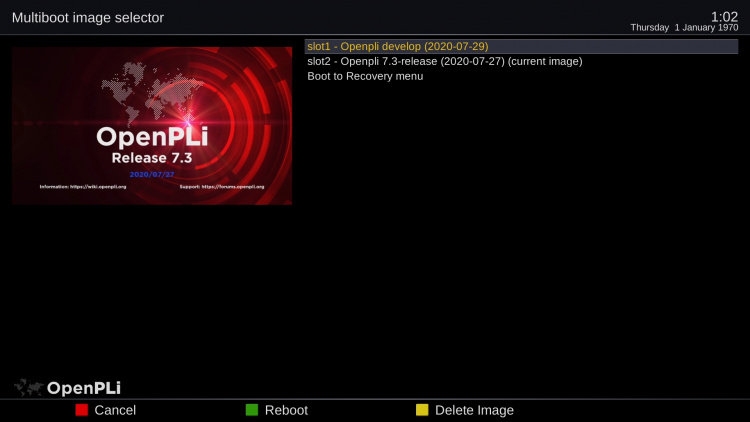 There is also the possibility by pressing yellow button to remove an image. 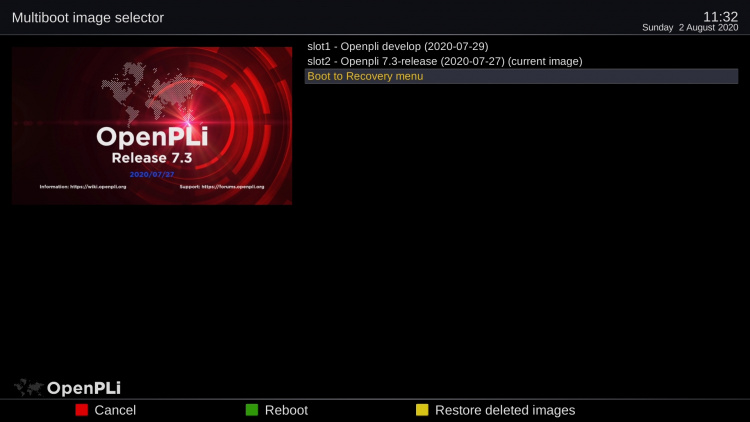 As you can see in the picture above there is an option (last one) to boot to a "Recovery Menu" this is a vendor specific option, meaning it has nothing to do with OpenPLi. You can compare it with the bios on a mother board of a PC. Most vendors use a specific combination of pressing button's on the remote control or on the receiver to access this menu and for this you will need to look at the vendor's website or manual. OpenPLi offers it from the menu.