Are you confronted with channellist (bouquet) that don't start with the number 1, then enable this and it will. Goto Main Menu -> Setup -> System -> GUI Settings -> User Interface and enable "Alternative numbering mode"

There is bug with the VU+ drivers so that a scan can not be completed if tuner D is used.

This is the issue: input3 and input2 have no input3_choices or input4_choices so the Enigma2 doesn't try to initialize them.

Temporary Solution, that still works after a reboot: Install the IPK files that are posted at: https://forums.openpli.org/topic/49214-vuplus-duo2-dvb-t2-tuner-nim-tt3l10-stopped-working/page-3#entry701207 Reboot the receiver, and the scan problems are solved.

The file that can be found at the forum (see below) will place the original factory bootlogo back on your receiver. The content of the file needs to be placed on a USB pen drive. The file contains splash screens for the models:

You do not have to pick one of the bootlogo's.. Your receiver selects only the file that must be needed. .

So the following steps must be taken:

CI module with softcam (eg. OScam), so using both and making them work together

If for some reason you want to use a CI module and OScam, you will probably run into error messages. The problem or better the errors are there because CI modules are designed to work standalone. So if you want to make them working together, best practice is using the "Commoninterfaceassignment plugin”. So to let a CI work together with a softcam download and install "Commoninterfaceassignment plugin" which is located in the system section of the Plugin browser. After installing the plugin goto Menu-> Setup -> SoftCam/CI -> Common Interface Assignment and define every channel for this CI module, that you have a subscription for. Enigma2 (OpenPLi) will then send all the other channels to the Softcam (OScam) and not to the CI module.

Crash logs are generated during a system crash, also known as a GSOD (green screen of death). The log can give insight to the probable cause of the crash. If you want help with the content of the file, you can post it on our forum. The crash log file is named like in the example below:

Normally the crash.log file is stored in the root of the HDD so in

The location of the crash.log file without any HDD (Harddisk) present

Normally the crash log file is stored in the

If you want to debug and want to know what is happening in Enigma, you can start your receiver in debug mode with the following command:

To stop: Press CRTL-C. Enigma will halt. Then start enigma with:

Or reboot the receiver with:

For easier reading (Less logging) use: 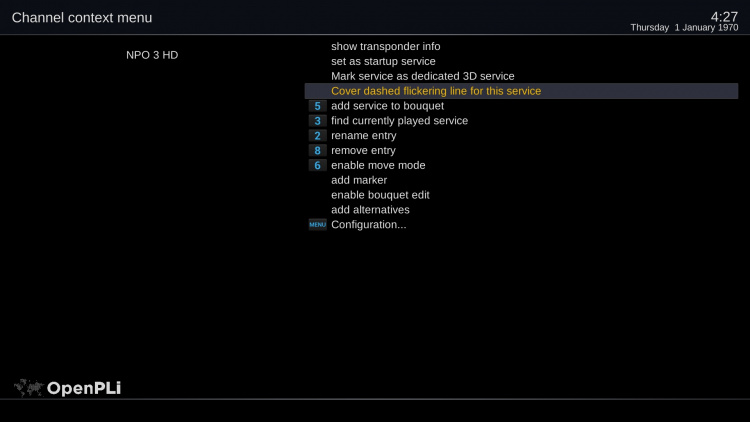 Harddrives will fail, that's just a question of time, so a check from time to time is prudent,certainly when you have switched it off using the power switch or pulled the plug, as this will mess-up the filesystem. (btw it can also be a USB stick but it has to be formated ext3 or 4). When a internal drive is present you can check it using the menu. Main menu -> Setup -> System -> Expert Settings -> Harddisk -> Filesystem check.

I cannot record with my receiver or recording with a Zapper (eg. Vu Zero / Vu Solo Se)

By default some Vu+ boxes are a zapper, meaning you can not record with it. If you want to record with it, you can install the "pau" plugin/extension. It is located in the extensions section of the plugin browser.

Here are some solutions when you run into problems with mounting\sharing a medium (HDD) in your network.

When your box uses a kernel 3.x (Menu-Information-About) and you want to mount something that has a kernel 4.x your CIFS share might fail, even though you entered the data carefully, but there is a solution.

The solution is simple, you can try the following; If you make a mount with Mountmanager, change the "mount options" from "rw" to "rw, sec=ntlm", this will lower the security standard from ntlmv2 (default with kernel 4.x and up) to ntlm.

Now exit and re-mount or Reboot your box and if this was the cause, you can now access your share.

There is a similar issue regarding the version of the SMB protocol used.

Recently, due to several security issues, an action has been ongoing to disable the unsafe SMBv1, not only in Windows, but also in NAS systems like Synology for example. Windows has the option to cycle through all available and allowed protocols when you want to connect to a share, so you as a user don't notice anything and don't know which protocol is used. But the Linux kernel driver doesn't. It connects using the version it has been programmed with, and if you as a user need a different version, you need to specify this in the mount options.

The solution is to change the SMB version used to mount, to do this in Mountmanager change the "mount options" from "rw" to "rw, vers=3.0" (or whatever version you want to mount). You might have to try a few, if you don't know which one your server supports, but always start with the highest version.

This is a good overview on this subject: https://www.happyassassin.net/2017/11/03/linux-kernel-4-13-and-smb-protocol-version-fun/

The same is true for the authentication mechanism. This used to be NTLM, but in Kernel 3.8 the default has changed to NTLMv2, as Windows no longer supports NTLM (also because of security issues). But depending on the version and configuration of Windows (especially Windows Server), you might need to specify an alternative mechanism on the commandline too.

In case you have lost your box password or someone else has been so 'funny' to create a password without having informed you, there are several ways to solve this issue.

I assume that you still have access via Explorer with \\boxname or \\ipaddressbox. If not, then the only 'solution' to get access again is to flash your box which is actually not a solution.

There is a second scenario to solve this.

The splashscreen is written in a limited reserved space of flash. We believe that the splash screen is not intended to be image specific, it should just show the manufacturer and/or box type information. The dimensions and type of splash file supported by the bootloader, differ per brand, and possibly even per box. We advice to stay away from that, leave the splash screen to the bootloader, and the manufacturer.

If by some reason, let's say another image, has changed it, you can restore it to the one from the manufacturer. Do a search on the OpenPLi site using Google and type:

For the Edision jump to Restore Splash screen for Edision

For the Vu+ jump to Restore Splash screen for Vu

For the Zgemma jump to Restore Splash screen for Zgemma

Time, if you have problems getting the correct time

There are 2 solutions, if somehow you don't have the right time on you receiver, using the internet or use the transponder of a satellite.

Here you install a plugin called Systemtime, it is in Main menu > Pluginbrowser > Download plugins > Systemplugins and uses NTP, just like your desktop PC, to get the time from an internet time server, so after installing it, it will be in Main menu > Setup > Sytem and there are various settings.

OpenPLi will, at startup retrieve the time from a transponder, so if you have a satellite setup, it is wise to make use of the Startup service. By doing so and choosing a reliable transponder (=channel) you will always have the right time. For the Dutch, choosing an NPO channel will be a good choice.

USB memory sticks working or not

When you want to use an USB memory stick, lets say for flashing your box with OpenPLi, there is no way of telling your stick might work, it's trial and error! Because the USB detection system in the bootloader of your receiver is very simple, there are 2 things to consider:

Generally speaking, small old USB sticks with less than 1Gb have a bigger change to work.

So if you have a movie that can't be played, you'll have to re-code it. For this you can use programs like Handbrake. A good choice would be h264 or h265 as a video codec and mp2, mp3 or ac3 as an audio codec.